Various tax implications can arise when a debt becomes statute-barred. So what is statute barring and when can it be a problem?

In simple terms, a debt is statute-barred when it has reached a statutory limitation period where it can no longer be legally recovered by creditors.

Specifically, each state and territory in Australia contains its own “statute of limitation” provisions that provide a procedural basis for a lawsuit for non-payment of a debt, including a time limit, which can be used as a defence against the claim from creditors.

For debts that arise from “simple contracts”, the limitation period is six years, with the exception of the Northern Territory where it is three years.

Very broadly, a “simple contract” in respect of a debt typically includes unsecured personal loans, credit card debts or debts sold or referred to a collection agency. The limitation period will be different for secured debts and debts arising “out of deed”.

As the laws vary from state to state, to ensure that the debt is deemed “statute-barred”, it would be prudent to seek legal advice as these laws can be complex. Once this is determined, the application of the relevant tax laws will follow.

The table at left/right/below summarises the broad application of the statute of limitations in each Australian state and territory.

What should you consider?

Some general points to consider when dealing with statute barred debts include:

Generally, the place of the debtor’s residence at the time of entering into the contract is relevant in determining the governing jurisdiction (although this can be varied in the contract itself).

For most debts, a creditor must begin court action to recover the debt within six years (or three years in the NT) of the date:

The limitation period starts from the latest event as shown in the table. As a general principle, a loan arrangement that does not expressly include repayment terms is taken to be repayable on demand. Such a loan creates an immediate debt, with the clock ticking for statute of limitations purposes from that time.

As noted, confirmation can be through acknowledgement in a written form and signed by the debtor or an agent. There is a body of case law that considers the issue of whether a debt has been acknowledged. For example, a debtor’s signed balance sheet was held by one court to be sufficient acknowledgment of a debt. Alternatively, a payment of interest on principal or part payment of principal can also be treated as an acknowledgement.

The expiration of a limitation period precludes a remedy from being available, such that if a lawsuit is brought against the debtor then they can claim the statute as an absolute defence.

Note that the expiration of a limitation period for the debt does not mean, in most cases, that the debt ceased to exist. There may have been acknowledgement at some stage during the period, which would typically restart the limitation period.

State by state: Statute of limitations in a nutshell: 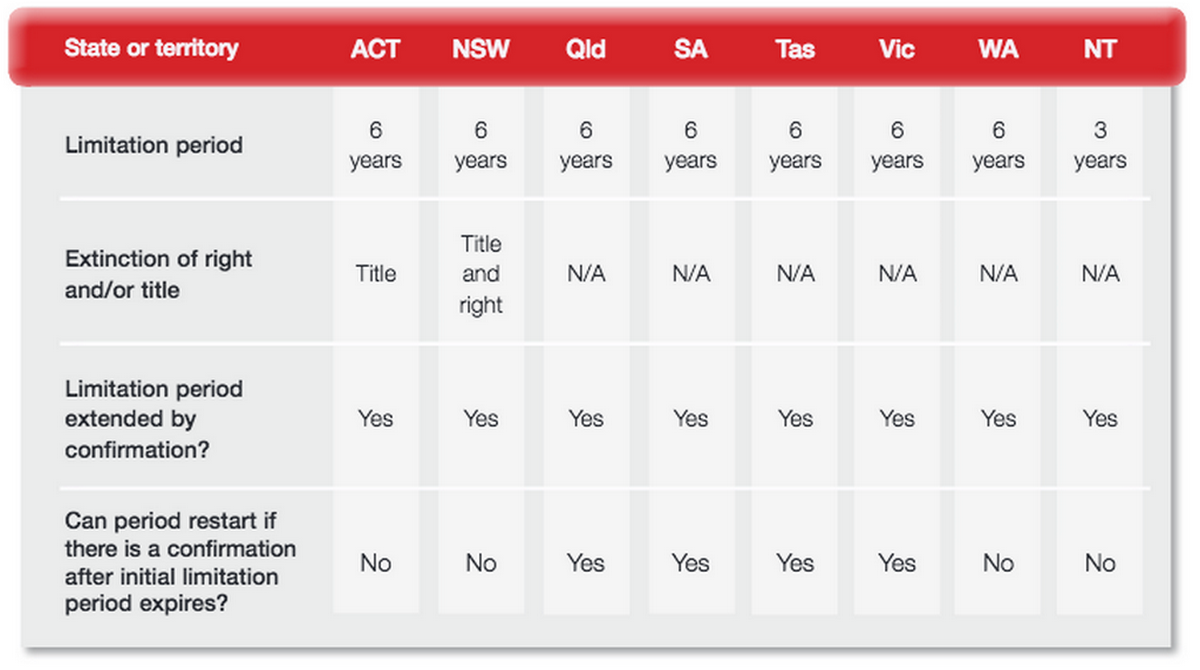